Queen Elizabeth National Park is one of Uganda’s most famous national parks and traveler’s destination situated in the western part of Uganda in Kasese district close to mountain Rwenzori. The Park is one of the most popular tourist destinations in Uganda mainly because it is home to a variety of animal and bird species including the fascinating tree climbing lions of Ishasha. The park is approximately 400 kilometers from Kampala of about 6 hours. Queen Elizabeth National Park is known for its variety of wildlife and several beautiful crates lakes that wind through the rolling hills, the panoramic display of the Kazinga channel with an awesome view of the hippos, buffaloes, elephants and several bird species lined up at the shores. 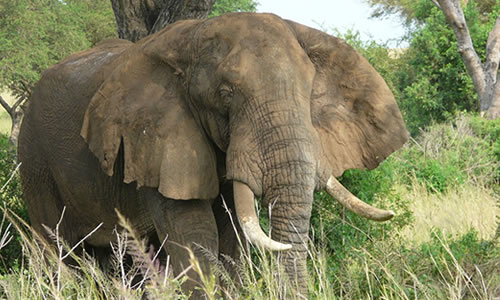 With a continuation towards Ishasha sector plains, another surprise of tree climbing lions resting on trees waiting to pounce on the Uganda Kobs and other preys will blow one away. Queen Elizabeth National Park sites on 1,978 km² with an extends from Lake George in the north-east to Lake Edward in the south-west and includes the Kazinga Channel connecting the two lakes.

Queen Elizabeth National Park harbors numbers of mammals of about 95 mammals which including  African buffalo, Ugandan kob, hippopotamus, Nile crocodile, African bush elephant, African leopard, lion, and chimpanzee. Crocodiles have only recently been seen in the Kazinga Channel where they had disappeared for 8,000 years after they were eliminated from Lake Edward by toxic ash from local volcanoes. The park is famous for its tree climbing lions and also its volcanic features, including volcanic cones and deep craters, many with crater lakes, such as the Katwe craters, from which salt is extracted.

What to do in Queen Elizabeth National Park

Boat rides along the Kazinga channel are the most popular activity to the mouth of the Kazinga Channel, this connects Lake George to Lake Edward provides the park’s prime wildlife spectacle and its shoreline attracts large numbers of birds, mammals which reptiles year round over 40km long channel.

Chimpanzee trekking in Kyambura Gorge in Queen Elizabeth National Park is one of the most popular tourist activities as tracking experience before; they embark on tracking chimpanzees in the 16-kilometer long Kyambura gorge.

Maramagambo is notable for its primate and bird populations. Trails explore the forest around Lake Nyamusingire. Wildlife sightings vary from day to day, but guaranteed events include the Bat Cave with a resident bat-hungry Python and the copper-rich Blue Lake.

The Mweya Peninsular has got great accommodation facilities and is great for sightseeing, with great views of the Park. Visiting with a guide is the best way to explore this as the guide will give you all the information you need as you go. The Mweya Information Center also provides all the necessary information about the Park as well as the Mweya Peninsular.

The Uganda Equator is where the northern hemisphere meets the southern hemisphere and is a great place for taking photos. There are also craft shops where tourists love to buy souvenirs.

How to get Queen Elizabeth National Park