Kidepo Valley National Park is situated in the rugged, semi-arid valleys of Karamoja in province valley in the far northern border with Sudan, Kidepo Valley is Uganda’s most remote National Park which sits on an area of 1,442 square kilometers. Kidepo Valley is one of the best virgin places in East Africa where wildlife can be viewed in spectacular landscapes and great buffalo herds with sprawling savannah and soaring mountains, Kidepo National Park might be the most picturesque Park in Africa which sharing borders with Sudan and Kenya’s Northern Frontier District, it is Uganda’s most beautiful, remote and least-explored Park. 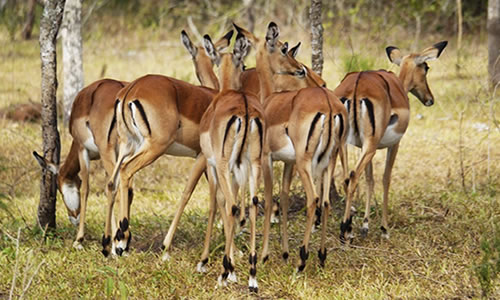 Kidepo National Park is an authentic game with a huge abundance of wildlife. It harbors over 80 species of mammals in the Park 28 cannot be found in any other parks in Uganda including Caracal, Stripped Hyena, Aardwolf, Cheetah, Bat-eared Fox, and Hunting dog are carnivore species unique to Karamoja region and protected within Kidepo. Kidepo also harbors 5 species of primate including the Kavirondo Bush Baby which is also unique to the area. Kidepo Valley has a number of rare ungulates including the Greater and Lesser Kudu, Chandlers Mountain Reedbuck, Klipspringer, Dikdik, Bright Gazelle, Beisa Oryx, and Roan Antelope.  Kidepo National Park has unusually small crocodiles with a maximum length of 2.5m compared to the Nile crocodiles which regularly exceed 4m. The small size is apparently a result of limited food availability. The common animals include Elephants, Zebra, Bush Pigs, Rothschild Giraffes, Eland, Jackson’s Hartebeest, Buffalo, Oribi, Lion, Leopard, Spotted Hyena, Black-backed and Side-backed Jackal. Kidepo is the best park in Africa for great buffalo herd.

Birdlife in Kidepo is remarkable too with 475 species, second to Queen Elizabeth National Park which has 625. Kidepo Park is a way to go for arid associated species such as the Ostrich and Kori Bustard which are unique to this region. Kidepo Valley is also outstanding for its birds of prey with 58 species so far recorded including Verreaux’s Eagle, Egyptian Vulture, and Pygmy Falcon.

What to do in Kidepo National Park

Game drives are the best stunning activity in Kidepo Valley which are mostly done along the Narus Valley is a rising and falling grassland plain surrounded by faraway mountains. This valley provides permanent water, and through most of the year, its wildlife gathers here. Therefore, this area is properly supplied with game tracks, having 4 loop circuits that explore the valley close to Apoka. Several creatures for example lions, reedbucks, Jackson’s hartebeests, oribis, buffaloes, and giraffes are visible within the valley.  Cheetahs plus leopards are as well seen but in smaller numbers. Game viewing can also be done along the Kidepo Valley where one can enjoy the sand bed river especially the dry seasons. The sand bed is like an oasis in a desert. It is lined with palms trees and has plenty of birds.

Nature walks can be done around Apoka camp at any time of the day and visitors are able to observe a number of animals such as Zebra, Elephant, Reedbuck, and Buffalo. There also long trails and circuits which visitors can walk in the early morning to observe species at close range and enjoy the beautiful wilderness.

Kidepo Valley National Park is the second Park in birding area in Uganda. The Park is only being discovered by birdwatchers and more bird species are being added to the checklist of over 475 recorded species. Some of Africa’s rarest and most sought-after birds occur in the Park including the Black-breasted Barbet and the Karamoja Apalis. The park is good for semi-arid species which cannot be found in other parts of Uganda such as the Ostrich which is certainly a sight to see in this park. It is also outstanding for its birds prey with 58 species recorded in the area.

The Sand bed along River Kidepo

The sand bed experience during the dry season on river Kidepo can very fascinating, here one can enjoy the wilderness experience while listening to different bird calls. River Kidepo is an intermittent sand river found in the northern part of the park. It stands out because it is lined by Borasus palms that make it appear like an oasis in the Sahara. Many bird species can be found around this area.

Through most of the year, shortage of surface water implies that less wildlife is seen within Kidepo Valley, although it is still definitely worth the drive to go to the dried out Kidepo River to walk along its 50-meter wide river bed comprised of white sand in between the banks blanketed with Borassus palms. “Kidepo” means “to pick from below” and this valley was frequented by people traveling to collect fallen Borassus fruits to use for fermenting when making palm beer. Kanangorok Hot Springs is located 11 kilometers past the Kidepo River along the Sudan border. It is a marvelous place to sit down and observe the mountains far past the frontier.

Hiking on Morungole Mountain is an attractive activity which leads to the IK people. The great Moroungole expedition which involves a day’s hike through varying vegetation and rocky terrain commanding spectacular views of Kidepo Valley National Park will expose visitors to a variety of dances from the IK, their way of life, their unique settlements and you get to learn their unique migration history.

The Karamajong tribe is the main local community inhabiting the Karamoja region and neighboring the park. They are some of the most remote people in Uganda and who have not been embraced modernization. The Karamajong culture and way of life is as undisturbed and Kidepo’s wilderness. Set out for a visit to enjoy their unique cultures, traditional houses called Manyattas and their setting of homesteads, traditional dances, traditional handcraft stools, spears, and hand bungles from beads.

The best time to visit Kidepo Valley for game viewing is during the dry season months of December to March and June to Late August when animals are concentrated near water points. During the rainy seasons, animals disperse from the valleys, moving to the higher and drier ground where they are not so easily seen in months of April to May and September to November.

Kidepo Valley National Park is located in the northeastern part of Uganda of about 700km forms the capital city of Uganda (Kampala); this makes it a perfect destination for a Uganda safari.

The park is accessible by both road and air or by road;

Chartered aircraft are available from Entebbe International Airport to the park headquarters with an aerolink. There are tentative plans to an international airport at Lomeja, so tourists can fly directly from other countries to Kidepo.