Our 1 Day Kigali City Tour gives you the origins of Kigali as the Capital city of Rwanda and can be traced way back to 1906 when Richard Kandt was appointed the Resident Governor of Rwanda. 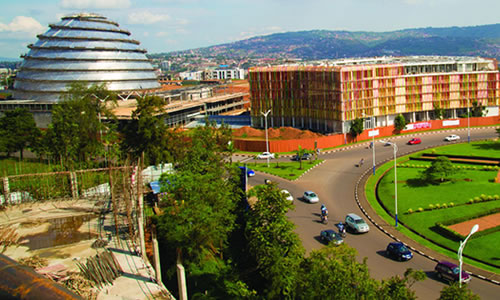 The Kigali Genocide Memorial commemorates the 1994 genocide against the Tutsi. The remains of over 250,000 people are interred there. There is a visitor centre for students and those wishing to understand the events leading up to the events of 1994. The Centre is a permanent memorial to those who fell victim to the genocide and serves as a place in which the bereaved could bury their family and friends. The Centre is managed and run by the Aegis Trust and the Kigali City Council.

Located in Kigali about 2 km from Kigali International Airport, the Palace served as home to Juvenal Habyarimana and Pasteur Bizimungu during the 1970s up to the late 1990s. The Presidential Palace Museum is one of the new museums in Kigali. It gives visitors a chance to visit the former state house as well as gain an overview of Rwanda’s history, one can also visit some of the flight debris of the FALCON 50 presidential plane that went down on 6th April 1994.

The first part presents Rwandan life in all its aspects (social, economic, and politically: mon-archism) before the colonial period.

The second part, which is the biggest one, the museum traces experience of Rwandan people during the colonial period, more specifically under the German rule from 1884 (the time of Berlin conference), throughout colonial administration, World War I, few to mention; up to 1916, including Richard Kandt life and his deeds in Rwanda.

The third part is galleries showing where the history of Kigali; Kigali before colonial time, during colonial, and its naissance as capital city, is well presented.

Last but not least, it is the only remaining mark of the former Natural History Museum, that is; a temporary exhibition of live snakes, and a baby crocodile (measured 1 m in 2017). While visiting this external part, one can enjoy the view of spectacular surrounding scenery, most importantly, stunning view of Kigali, Shyorongi, and Jari mountains.

Campaign Against Genocide Museum is a museum located in the Parliamentary building, in Kigali just 800 meters behind conventional centre road point, and just 4.9km, 9 minutes’ drive from Kanombe Airport. This campaign against Genocide Museum was opened officially on 13th December, 2017 by H.E Paul Kagame.

CAG Museum is built in the Parliamentary building which was once known as Conseil National de Development because this building hosted the Rwandan Patriotic Front politicians and the 600 man protection force (3BN) from 28th December 1993 as they were in the prepa-rations for the installation of Broad Based Transitional Government and the National Transi-tional Assembly and these 600 man protection force the (3BN) were the ones given the order first on 07/04/1994 by the RPA Chairman of High Command Major General Paul Kagame to break out from their initial positions defend themselves and rescue victims of Genocide in their vicinity when campaign against Genocide began.

CAG Museum depicts in details how the Campaign Against Genocide Plan was executed by RPF/A following the withdrawal of UN troops leaving the targeted Tutsi under the mercy of the Genocidaires and how only the RPF/A forces who were in the war of liberation took the unilateral decision to stop Genocide, Rescue victims of Genocide and defeat the Genocidal forces. This CAG Museum also has its outer part comprised of monuments including that of the 12.7mm Machine Gun that helped in containing the advancing genocidal forces.